Your Dream Job: Illusive or Imminent? 3 Steps to Imminent 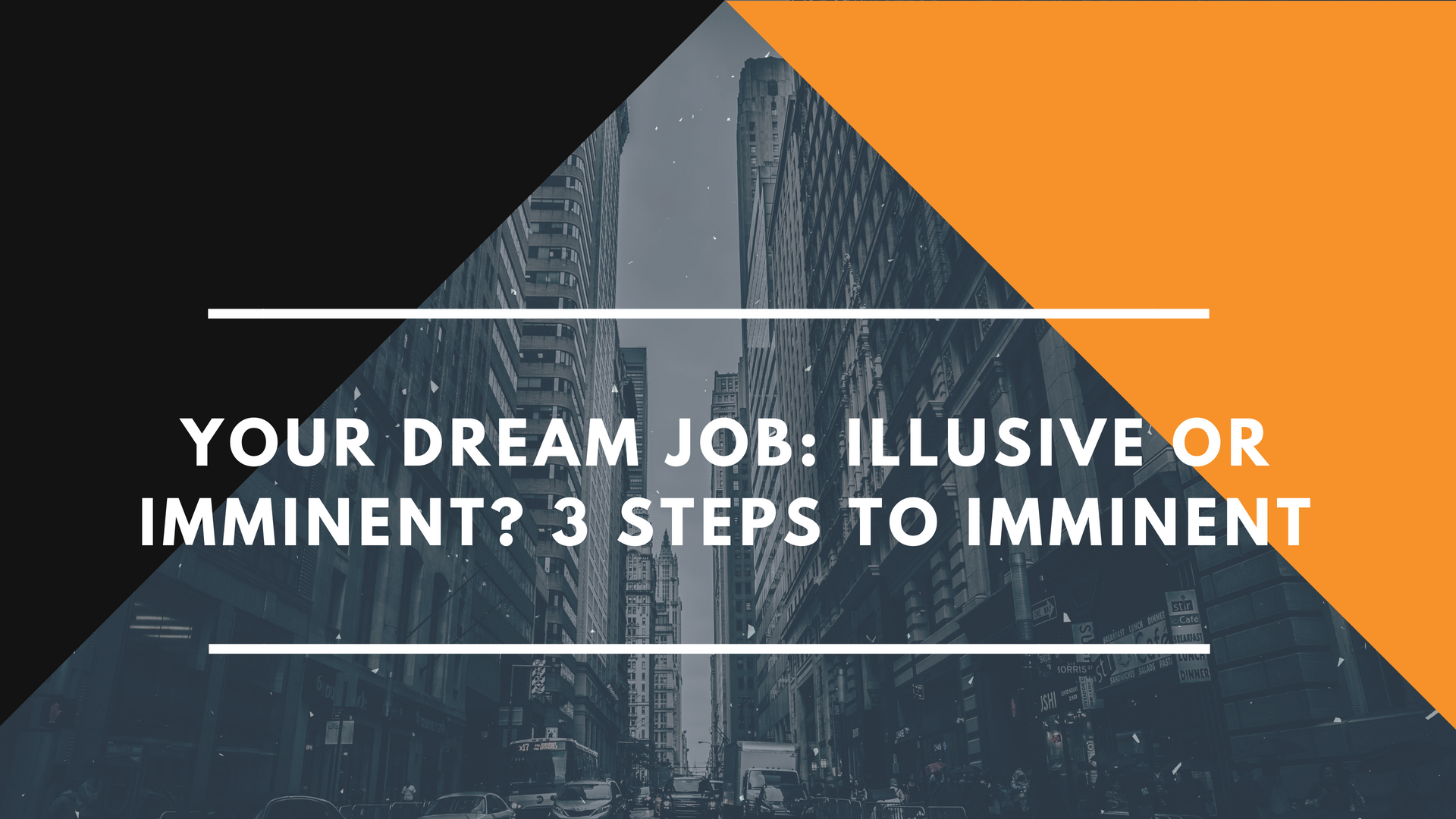 I mentor young professionals. Some I’ve met through consulting and others via volunteer work. A question I often get is, “How do I find my dream job?” I hear this often from Millennials—my kid’s generation. No surprise as they’re at the age when I was asking the same. A difference is that many of these young people are leaving non-dream jobs with nothing on the horizon. Sadly, many have their “dream job” and don’t know it.

A dream job isn’t something you find—it’s something you build. Three things that have worked for me and those I’ve had the honor of mentoring.

Know how your job contributes to the company.

The test? Find someone who doesn’t work in your industry and tell them how you affect the bottom-line. If you take longer than 30 seconds—you don’t know. If you don’t know—find out by asking your manager and peers. Most of the time you’ll get an answer and it’ll be invigorating knowing your role in the big picture. If you can’t find the answer you’re likely in a role that is easily eliminated—time to look for something else.

This is a top reason why I’ve always been drawn to sales and marketing. When you’re in a customer facing role—it’s very easy to know how you contribute. When you’re carrying quota—even easier.

Make the job your own.

Now that you know how your job fits in with the bigger picture you’re equipped to get creative. Good people, like you, learn a job well so that you don’t need constant help and so that you can see how to do it better. Whether you’re an HVAC technician, a marketing specialist, or a salesperson, there are always ways to improve. Discover them, test them, show others—you’re making the job your own. You’re becoming the Subject-Matter-Expert (SME). It’s more fun, it’s more visible, and you’re helping others.

During my final interview, at Microsoft, SVP, John Neilson, said they had three jobs for me to consider. Two roles were related to what I did at HP. The third job was to be Product Launch Manager for Windows 95. I told John that I knew nothing about launching software let alone the hottest product in the industry. John said, “That’s the one you should take.” I asked, “Why would you give that job to someone who’s never worked in software?” His answer, “Sometimes it’s good to give the job to someone who doesn’t know how we did it before.”

I had no choice but to make that job my own and each successive job at Microsoft demanded that I figure out my own path to success—a dream come true.

The reason we celebrate in sales is so that we remember the feel of winning. As with many professions, we hear “no” more than “yes.” Great salespeople learn from “no” and then move on. In fact, when you ask successful salespeople about their worst losses they often find it hard to recall and if they do they’ll answer with “Here’s what I learned.” By equating losing with learning you make it a positive experience and you avoid making the same mistakes.

The same is true in other professions. Baseball legend, Reggie Jackson, is famous for hitting home runs—three in three consecutive at-bats, in the 1977 World Series. Jackson’s hitting heroics in the post-season earned him the nickname, Mr. October. What isn’t remembered is that he also struck out more than most, but nobody remembers that, including Jackson.

I started developing The Five Abilities® in my fourth year of selling, at HP. That fourth year was preceded by three years of barely making my small quota and worse, we lost every strategic project on which we bid. In analyzing what to change it came down to three things. We had to be visible with the real decision-makers and influencers, who didn’t know us. (VISABILITY) We weren’t viable because nobody knew about our products. (VIABILITY) Most importantly, the project requirements were being defined by our competition. (CREDABILITY)

We learned from each mistake, allowing our team to improve. In the fourth year, with the necessary VISABILITY, VIABILITY, and CREDABILITY, we were competitive with the incumbent suppliers. Through that time of small revenue and non-strategic wins, we met and delivered value propositions to people who weren’t on our radar before. We learned their personal motivations for buying and taught them how we could help them more than others. (VISABILITY & CAPABILITY) In developing relationships with decision-makers and influencers we demonstrated what it was like to work with us. (RELIABILITY)

Most importantly, a job that once was agony became my dream job. I knew how I contributed, I made the job my own, and I turned losses into learning. I also earned President’s Club honors and became a SME in how to sell to the aerospace industry. That learning is what became The Five Abilities®.