The No. 1 Way to Determine if Your Company is Thriving – or Dying 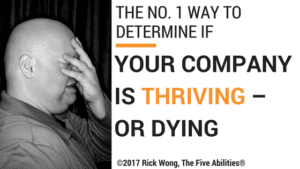 When your business is growing fast, what is there to complain about, right?

Well, a client of mine just discovered that even such a scenario has its pitfalls.

The client’s business was split up into territories, with one territory showing a blizzard of first-time customers.

As I sat in an operations review with the teams, I watched the jubilant reaction to the sales success. Then, the buzzkill (that would be me) asked: “Why are your existing customers not buying?”

To find the answer, the CEO picked up the phone and called an old contact in that territory.

“What happened to Monte? He stopped coming to see us,” the customer asked.

Well, it turns out Monte had been sent to another territory to replicate his success.

Then, the news got worse: The new salesperson wasn’t doing customer support at all.

One of the biggest lessons I learned when working for HP and Microsoft was to always know my numbers to avoid unpleasant surprises.

At Microsoft, Bill Gates and Steve Ballmer held mid-year reviews every January to get an update on all the major businesses within Microsoft. Leadership teams would show their revenue, share, and profit results against plan. They showed what worked and what their plans were if something was not panning out.

It was done at mid-year so we had time to introduce corrections in Q4 (April-June) allowing us to start the following year with fixes in place. In the fall of 2003 (July 2002-June 2003) Steve asked me to design and implement a new program in response to a weak Q1. We were on a flight when he raised the idea, and he could see the pained reaction on my face.

“What’s the face for? You know we have to do something,” Steve said.

“I know, but we’re deep in mid-year review prep and this’ll take tons of time for me and my team,” I said.

“Come on Rick! I could ask you anything about your numbers right now and you could answer me. Right?” he said.

I admitted that I often reviewed my numbers every day, spurring Steve to push me about letting go of mid-year concerns and focus on the new program.

I learned from Steve, Kevin Johnson and Jeff Raikes that when you run a far-flung team you must learn to manage by the numbers. Numbers don’t tell you everything, but they’re typically the leading indicator when things are going really right – or really wrong.

Kevin Johnson (currently CEO of Starbucks) taught me that finding the story in the numbers was the only way to manage a large team.

“No matter how hard you try, there comes a point where you just can’t stay close to everyone,” Kevin told me.

At the time of the talk with Steve that I mentioned earlier, I only had 22 employees, but they were in four cities on three continents. Even a small dispersed team offers the challenge that Kevin mentioned. Later, when I had 350 people scattered across Asia and the U.S., this discipline was immensely helpful.

In the end, we implemented the new program at Microsoft and it earned us “Team of the Year” honors. After Steve finished my review that year, he walked around the room to thank everyone.

The lesson to learn here is to always know your numbers. They won’t lie to you or try to sugarcoat the truth. They will tell you the unvarnished story of your business. This is critical in young companies whether you’re a salesperson or the CEO. 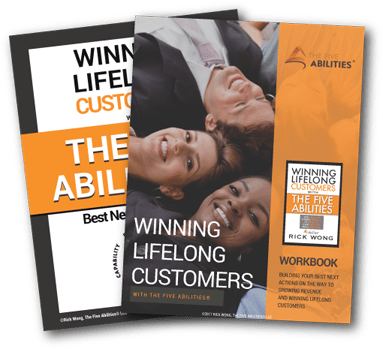